St. Patrick’s Day has been celebrated around the world since the 1700s, not only in Ireland, where it’s a public holiday, but also in Canada, the United States, Argentina, Australia and New Zealand. It’s even been recognized in space; astronaut Chris Hadfield marked the occasion on the International Space Station by wearing green and singing Irish standard, Danny Boy.

Research from the National Retail Federation indicates that spending on St. Patrick’s Day festivities will add up to almost $5 billion in the U.S. And while millennials are primed to party on St. Paddy’s, it’s the 35- to 44-year-olds who are laying down the most cash.

Our green runs deep, and St. Patrick’s Day is a good time to channel the luck of the Irish with a sweepstakes or contest that can help you build your brand, keep customers engaged and expand your base of loyal followers. Use these ideas to help you brainstorm ways to infuse your brand with the power of the shamrock. 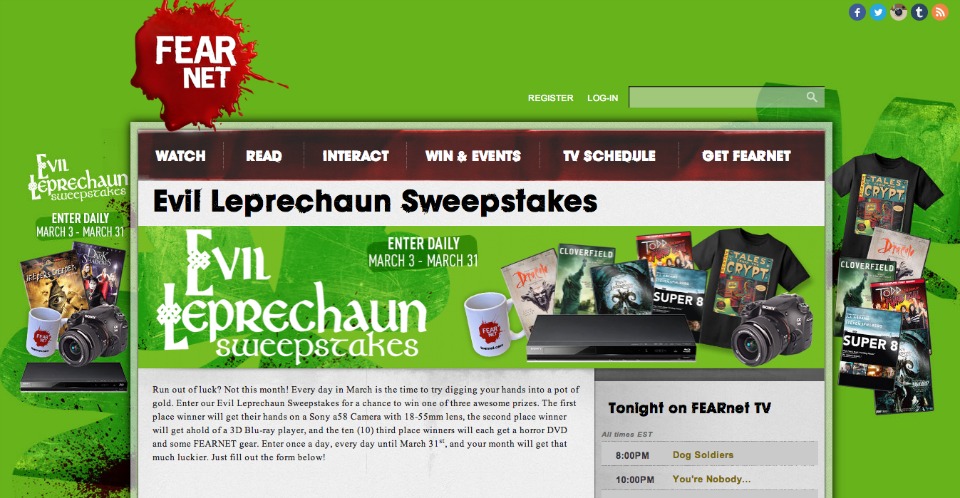 If zombies and leprechauns went toe to toe, who would win? That’s the kind of question horror fans might ponder around St. Patrick’s Day. So why not give them more of what they yearn for? Holding a sweepstakes is one way video game companies, niche TV networks, radio stations and other media can lure new and faithful fans alike to enjoy more of their products.

FEARnet TV, for instance, fed its audience’s hunger for horror with its Evil Leprechaun Sweepstakes by offering some bloody great prizes: a Sony camera (grand prize; valued at $499), a 3D Blu-Ray Player (second-place prize, valued at $199) and a horror DVD and FEARnet gear (10 third-place prizes, valued at $15 each). For a chance to win the random draw, participants were simply asked to fill in an online form. The bonus: they could enter once a day during the contest period for more chances to win. 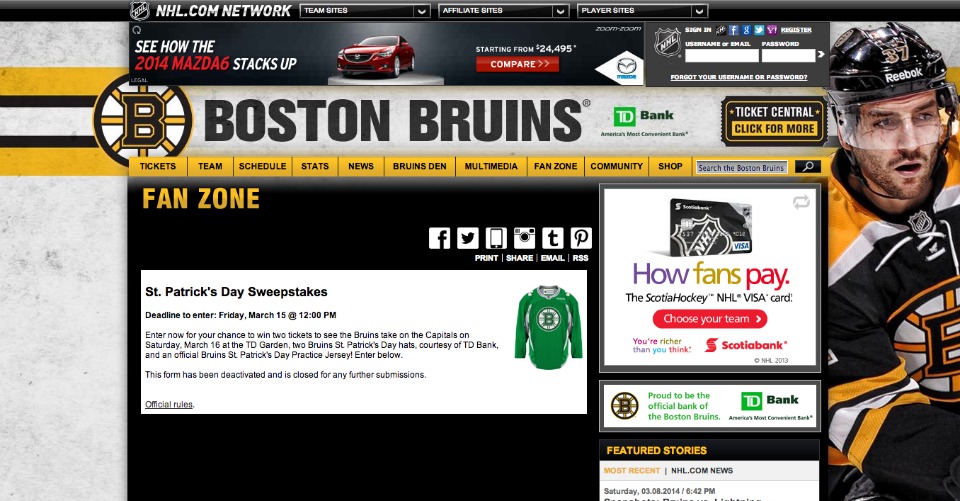 Everyone loves to cheer for their favourite sports teams, especially when they’re playing at home. Heritage, patriotism and pride of place can transform even tepid fans into the biggest cheerleaders. (Remember how the Seattle Seahawks’ fans regained the Guinness World Record for crowd noise, with a 137.6 decibel reading?) Sometimes a little incentive can help cut through the noise of the competition.

That might have been the thinking behind the Bruins St. Patrick’s Day Sweepstakes. Boston’s NHL hockey team offered fans a chance to win a prize pack of gear valued at $495: a limited-edition, spoked-B jersey (complete with shamrocks on its shoulders, in kelly green, of course), two Bruins St. Patrick’s Day hats and two tickets to a home game. Participants entered the sweepstakes by filling in a form online and the winner was selected by random draw. 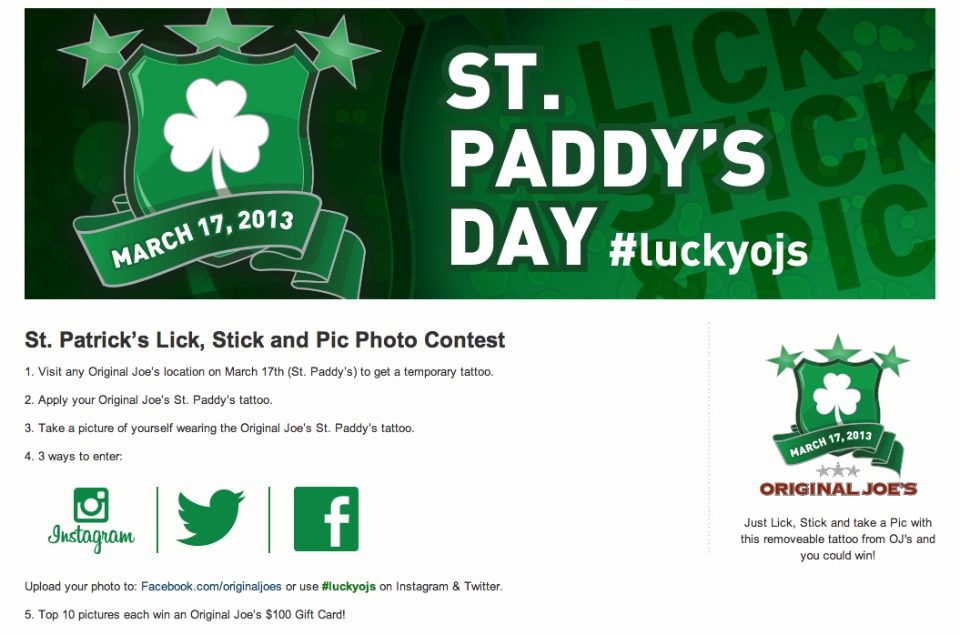 If you’re a restaurant or bar trying to entice the hoards to your non-Irish haunt, why not create a contest that shows your green spirit?

That’s the idea behind Original Joe’s St. Patrick’s Lick, Stick and Pic Photo Contest. The restaurant invited people to visit any of its locations on March 17 to get a temporary Original Joe’s tattoo, take a selfie photo with the tattoo, and post the picture on any of three social media sites: Facebook, Instagram or Twitter. Those who posted the top 10 pictures, as chosen by the restaurant, each won a $100 Original Joe’s gift card. 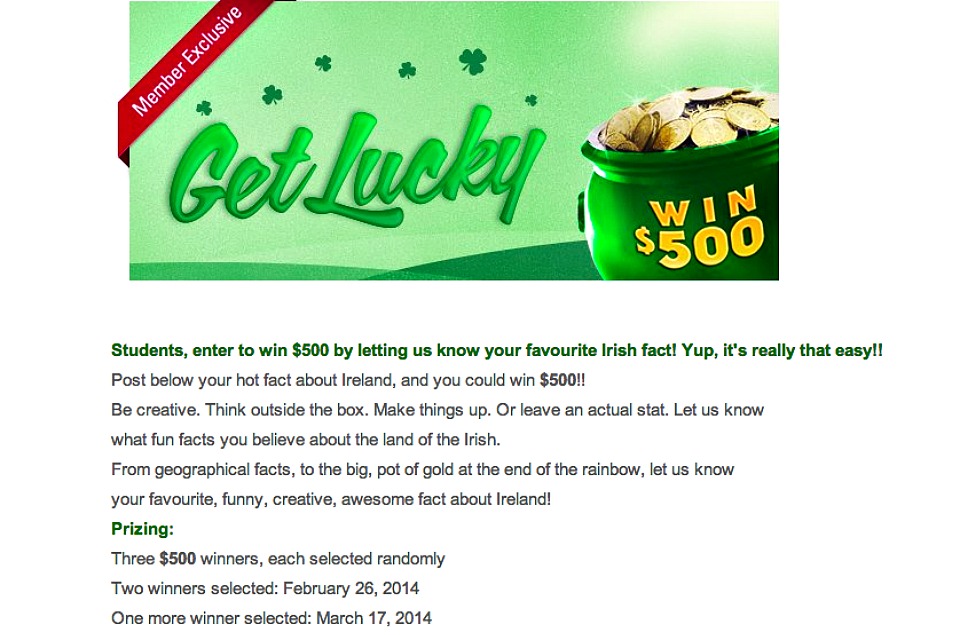 How can you catch the attention of your youthful customers on this age-old holiday? As the saying goes, “money talks.” And cash-strapped students are listening. St. Patrick’s Day, when students typically take a breather to celebrate all things Irish, is an ideal time to charm lads and lasses with a contest or giveaway.

StudentAwards capitalized on this notion when it kicked off its Get Lucky This St. Patrick’s Day and Win $500 Contest. Students who registered with the online community were eligible for a chance to win one of three proverbial pots of gold ($500 each), selected by random draw. But first they had to put their grey matter to work by posting a favourite Irish “fact” - real or made up - on the StudentAwards contest forum site. Just a month into the contest, more than 9,600 students had posted an Irish fact. 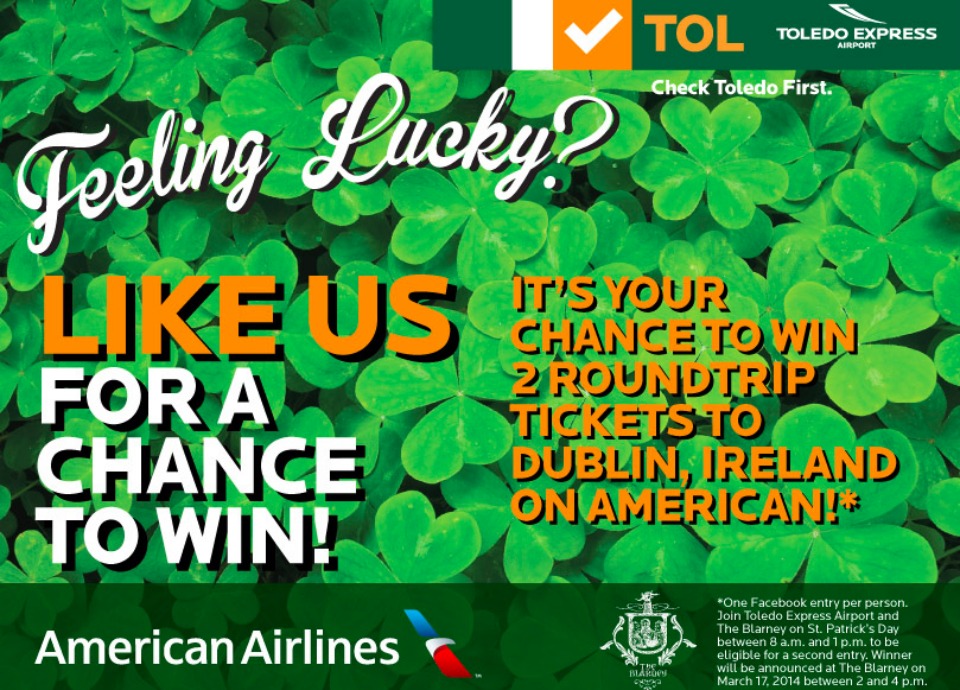 Finding your fortune at the end of the rainbow? Searching for leprechauns and four-leaf clovers? Such folklore might seem like a bit of blarney, but a trip to the Emerald Isle could convert the most dedicated contrarian.

That’s what Toledo Express Airport was banking on with its Feeling Lucky? TOL St. Patrick’s Day Ireland Flyaway Contest hosted on Facebook. The company partnered with American Airlines to offer this a jackpot of a grand prize: a trip for two to Dublin, Ireland, plus a $500 Marriott gift certificate. In order to win, participants had to like Toledo Express and fill in an entry form on its Facebook page. To earn an additional contest entry, participants could also show up at The Blarney Irish pub in Toledo at a specific time and day and scan a QR code. Toledo Express Airport also tweeted contest details and included contest information on its website, and shared its message across social media platforms.

Ready to launch your St. Patrick’s Day promotion? We can help. Our social promotions platform makes it easy for you to spread the luck of the Irish to your customers. Contact us for more info.